‘Match Fit’ is must see TV for Kiwi men

For all of its entertaining qualities, don’t underestimate the importance of Match Fit (Tuesday nights on TV3). It could not have come at a better time, with so many middle-aged men in NZ wishing they were healthier and not knowing where to start.

Asking for help and support can be the hardest step for anyone to take. I coach men who are not former All Blacks, but their stories are very similar. Some of them are watching the show every week – and with good reason. These ex-rugby greats were their heroes and now many are seeing them as a reflection of themselves.

The stark reality is, being a former All Black hasn’t been enough to set these guys up to live a healthy life. They are Regular Joes facing exactly the same challenges as a lot of men their age – too much bad food, too much alcohol, too little exercise, weight gain, chronic pain and injury, and low self- esteem. 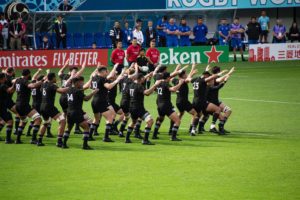 At 58, Frank Bunce is the oldest on the team. In episode two he spoke about his ‘why’. The reason for him being on the show and to make some lifestyle changes are his kids. He has six children, including a nine-month-old, and wants to be healthier for them. The ‘why’ is hugely important. It is probably the most crucial question you can ask yourself before embarking on sustainable lifestyle change.

I am not normally one who watches reality television. But I love sport and was intrigued by the trailers, particularly given I know some of the guys. What’s really got me hooked is their honesty and courage, given they are showing their vulnerability to a national audience each week. At times it’s actually made for uncomfortable viewing. Ron Cribb has spoken of a tough adolescence, Pita Alatini and wife Megan talked about his problems with alcohol, prop Kees Meeuws openly wept when talking about how the death of his parents affected him, and coach Graham Henry opened up about the depression he battled when he was in Wales. Nothing is off-limits. It is unfiltered and raw and hugely impactful. Holding a mirror up to themselves has revealed an inner strength to get going.

The ‘brotherhood’ that exists between them is great to see too. They are in this for themselves but know they will go further with the support and accountability of each other. In my role as a health coach, I stress this point to the men I work with. The support of family and friends is a key plank for their success.

The ex-All Blacks on Match Fit are proud men who are courageous enough to want to be helped and to be healthier. I’ve got nothing but admiration for the inspiring message they are sending to the blokes on the couch who are watching.